can anyone tell me how to add modernizr to sage? Step by step please. I tried for two days without results.

In my new Sage installation there isn’t modernizr.

This is what I did:

That should do it!
If you want to add or remove more detections, repeat step 2 - 5.

In this case modernizr.js is a separate file, right? Is it the best solution? Can modernizr stay inside main.js?

Yes it’s separate, but it always has been separate as far as I know.
I don’t think it’s an good idea to put it in your main.js, but you probably could by adding it as a vendor file in your manifest:

Tell me another thing: if I would add owl-carousel2 and magnific popup inside Sage I must follow the same steps of adding modernizr?

I have an error when I launch modernizr -c modernizr-config.json:

Please keep your thread about a single topic. Don’t keep asking for help with other issues. You also already asked about this in another thread.

You’re right. Can you help me? I try to work with bower but I don’t understand the steps. I read the manual without success.

Thank you in advance.

I don’t think it’s an good idea to put it in your main.js, but you probably could by adding it as a vendor file in your manifest:

@Twansparant just a curiosity, why is not a good idea to put modernizr inside the main.js?
thanks

Sometimes you need a modernizr detection in your head and not in the footer, or you only need modernizr for IE9 <. If it’s in your main.js, you can’t enqueue it separately.

I needed to exclude modernizr.js from jshint to get it running, like described in this thread:

Is it possible to ignore files in jshint when running gulp --production?

First, thank you for topic. I did these steps above and gulp. There show a lot of errors on it. 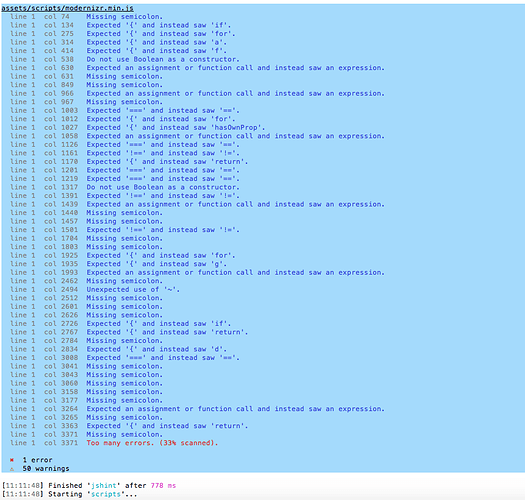 Thanks so much for this answer, very clear and easy to follow.

Due likely to an update in the Sage lib/ configuration since you posted this answer, the enqueue script commands have been moved to the lib/setup.php file, inside the assets function.
Just FYI

thanks so much for this answer.

I’m head banging trying to find out how to add the modernizr script to the jshint ignore file:

.jshintignore is like .gitignore - you make a file in the root theme folder called .jshintignore and put the script you want to ignore in it like so:

If that doesn’t work you can use flags in your modernizr script like so:

Nothing to ad here

Thank you! The .jshintignore did not work, but the flags did.

Isnt’t it eslint instead of jslint?