Sage 9 is just, unbelievably slow for us

I understand tons of people have issues with Sage being slow, but this is something else.

We’re running Sage on MAMP - there’s another 30-40 sites hosted in there which are lightning-quick and issue-free.

Where would I begin trying to resolve this? It’s completely unworkable at the moment.

Sage is the starter theme with blank page on front end

So what kind of issue you have ? If after fresh install and activate theme something not works check install steps again. If you have some problem with the webpack, again check the errors in console or terminal. Enable debug in wordpress config file. Probably you missed something.

I understand tons of people have issues with Sage being slow, but this is something else

I totally can’t agree with that and I think many other people will disagree as well.

Out of the box, there isn’t really anything Sage does that could cause this kind of performance. Off the top of my head, the only potential bottlenecks I could see Sage itself introducing would be through an improperly configured build process (or a nonstandard environment for the build process)–although this would only affect dev–it would have no effect when not running yarn start, or some kind of issue w/ filesystem speed–because of Composer, etc, Sage could potentially access the filesystem more often than a theme built in a different way.

Generally though, Sage by itself won’t cause this–it just isn’t doing anything that would lead to that kind of lag. @Jacek’s suggestions are good ones. I’d also check out Query Monitor (or something similar) to see if you can identify problematic queries that could be causing this. If your theme is making any AJAX calls or hitting REST endpoints, I’d also look into the performance of those: Since PHP executes code synchronously, it must wait for external requests to resolve before it can move on to other stuff, so that can be a frequent bottleneck.

I understand tons of people have issues with Sage being slow, but this is something else.

I wasn’t aware of this being a common complaint, but if you can point us toward other folks who’ve had performance issues w/ Sage I’d be happy to look into it more deeply.

As far as ‘common complaint’ you can just search here for ‘sage slow’ - there’s quite a few! 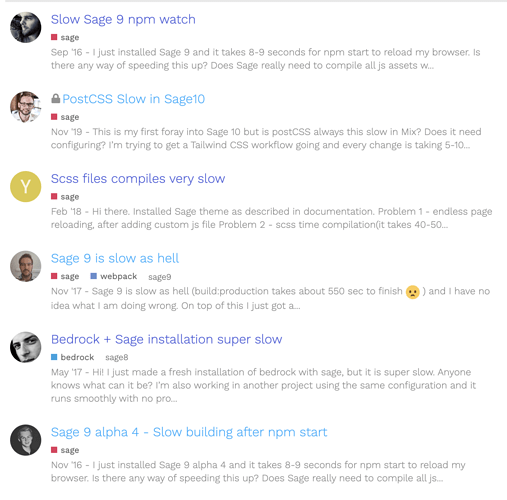 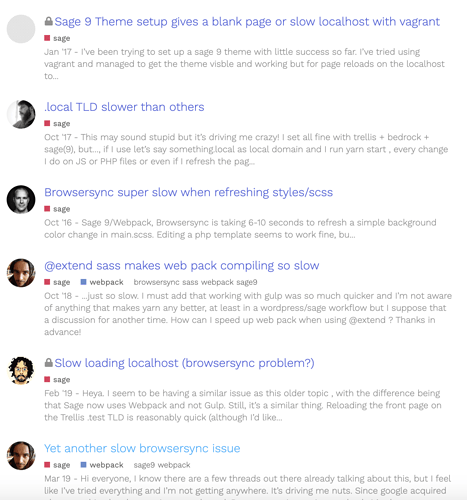 I’ll take a look at Query Monitor and see if there’s anything I can figure out. Considering it also takes super long just to update a stylesheet I’m not sure it’s query-related or anything, though. We have some quite large-scale Laravel projects and whatnot also in MAMP which are super-quick - I’m just suspecting Sage is doing some weird Webpack stuff, and/or running unnecessary queries or something.

Sage (9)/blade extensively caches into the [...]/uploads/cache directory.
Maybe there is a bottleneck I/O wise?

Most of these look like they’re about the build process or BrowserSync being slow, but the symptoms you listed look more like you’re having a server side issue. Are you seeing the issues you describe all the time, or only when you’re running yarn start?

Once it’s compiled with yarn build:production it runs great - no issues at all. It’s only during yarn start that it’s so sluggish.

Updating after compiling a stylesheet is quite time-consuming (~30sec), but the slowest by far is just refreshing the page (~1-2 minutes). The fans are running like crazy so it must be doing something intensive.

There’s a few controller methods, but nothing outside ordinary WP queries and whatnot. Perhaps it’s running these a bunch of times or something - I’m not too clear when it runs its queries (outside of manually calling App::something()). I’ll throw some error_logs in and check I guess.

As a first step, you could use a simple profiling plugin like laps to find out what part of the site exactly causes the slowdown:

Light WordPress profiler. Contribute to Rarst/laps development by creating an account on GitHub.