What is the basic setup for sequel pro connecting to vagrant?

I had it working but now (with SSL certs added) I can’t seem to connect to a site I previously was able to connect to.

This was working previously, sigh.

Which box are you using? If VVV you can connect directly. See the direct connection section here: https://github.com/varying-vagrant-vagrants/vvv/wiki/Connecting-to-MySQL

I’ve had similar problems in the past. SSH worked on the first box I set up, but then would not work on any box after. I tracked some info down about this in the past but I don’t remember exactly what it was. I think it had something to do with known hosts, check the article below

Already read through those articles before posting here

The only thing different in the setup I have now is I’ve added SSL.

Use the insecure private key inside the .vagrant folder.

tried that already too

Try SSHing manually to the VM with the credentials you are using in SequelPro to see if it works. ssh vagrant@mysite.dev.

This might help. It’s really a laravel tutorial, but it’s a similar setup with a digital ocean vps.

The beginning of the video doesn’t apply, around the middle he explains how to use sequel pro to connect via ssh. Hope it works.

Connecting to Your Database

Before we can SSH into our new server, we must first apply a public SSH key. At that point, we can poke around, or even tunnel into our database, using tools like Sequel Pro, Querious, or Navicat.

I am able to connect using the private _key and DB credentials for the specific box.

When trying to SSH I get

I recently started toying with OpenSSH certs, I’m thinking this is what is causing the issue.

Reading the Vagrant docs, this could be where my issue sits

Creating a Base Box - Vagrant by HashiCorp

There are a special category of boxes known as base boxes. These boxes contain the bare minimum required for Vagrant to function, are generally not made by repackaging an existing Vagrant environment (hence the base in the base box).

I noticed that when I Vagrant Up I get Vagrant insecure key detected. which Vagrant then replaces. This looks like I’ve messed my SSL certs and I am at a loss on how to address it.

I can still run from within the site folder vagrant ssh. Should I be looking to replace the SSL certs manually within each site that I have this problem?

@buretta Try this example: Brain imploding trying to get bedrock + bedrock-ansible running... please help
No idea why the 127.0.0.1 ip doesn’t work since it’s binded to mysql and in the vagrant ssh-config readout. Maybe a key for that IP already exists in known_hosts.

I’ve removed all key’s for that host, I can also re-produce this issue on 2 separate machines.

Also having problems with this 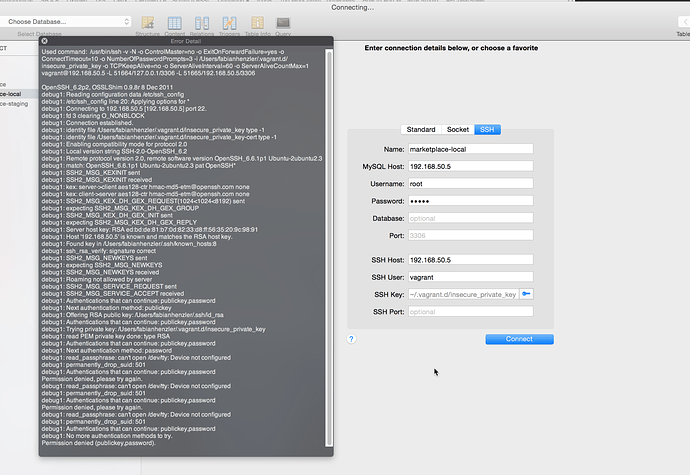 I’m wondering if it’s a particular version that we are having troubles with.

You have SSL enabled for development env?

What version of Vagrant are you running? vagrant --version

I was able to finally get this working, however I am hesitant to say it’s the correct way. Maybe others can chime in and provide better insight.

Vagrant changed the behaviour between 1.6 and 1.7 versions and now will insert auto generated insecure key instead of the default one. I’m still learning, but to continue working and ssh into the VM I applied config.ssh.insert_key = false into the vagrant file and then re-provisioned the VM. Below is a reference to where I added this, line 28.

I haven’t tested this across other projects yet.

What I need to further learn is the proper way to setup vagrant. Looking into the docs I believe I have not setup my authenticated_keys which seems to be the reason (at least in vagrant 1.7) why I ran into trouble all of a sudden. I had this setup https://github.com/varying-vagrant-vagrants/vvv/wiki/Connecting-to-MySQL but then things went to sideways for no clear reason or what changed…keeping in mind I’m flying solo and reading all the docs AND work gets a bit much and likely missed some clear statement about a certain change.

I wasn’t able to connect with the ssh key path shown in other instructions in the forum (the one in the .vagrant.d folder).

I changed it to this and now it works!