Hey folks!
I’m new here in the Community. I just set up my first roots project today and my website was live at some part of the day, after installing the Sage theme I’ve noticed some error with some .js files so I decided to delete all and start from the beginning (also to gain experience).

I tried to set up a new website and for some reason, I’m getting an error when trying to $ vagrant up
I’m using WSL ubuntu for installing everything (as mentioned in the documentation). 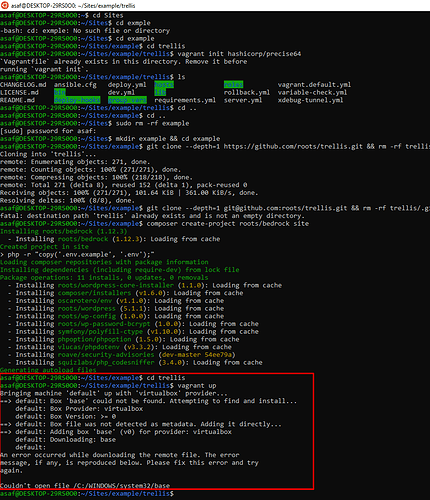 I tried to search on Google and also here on the forum if someone already managed to fix this error and I did found some posts but none of them helped me to fix it.

First to double-check: Have you followed these instructions? https://roots.io/getting-started/docs/windows-development-environment-trellis/

Second, I can spot at least two problems:

This is 100% a guess, but given your screenshot it looks like you’re setting up your project in a directory beneath your WSL user directory (~/Sites/example). Usually when I’m setting up projects in WSL I put them in locations that are “in” Windows’ file structure but have been mounted to WSL as mentioned above. For instance, I keep my project files in /c/users/ben/Clients (or, in Windows C:\users\ben\Clients). iirc WSL has its own virtual file system, which is where the user directory, Linux system directories, etc, are located, and Windows doesn’t have access to the stuff on this virtual filesystem (because Windows can’t understand most Linux filesystems). When you’re running Vagrant in WSL, what you’re actually doing is running Vagrant in Windows because WSL can’t create virtual machines. My guess is that Vagrant in Windows is unable to see your files because they’re in that virtual WSL filesystem—specifically your vagrant.default.yml file—which is why it tries to install a nonexistent box called base and then tries to download into windows/system32/ (probably the default working directory for certain running executables). My guess is that it fails because it can’t write to that directory w/o admin permissions, but it shouldn’t be writing to that directory anyway.

My suggestion would be to try your setup process again, but instead of installing to ~/Sites/example in WSL, you install to something like /mnt/c/users/your-user/Sites/example. If that works and you don’t like typing out /mnt/etc... then you can always symlink your Windows-located sites directory to something like ~/Sites.

Hey! Thank you for this message, I thought since all the documentation shows to run everything through WSL so I need to use this to set up a website.

Maybe you’ll help me to organize when to use what.
So as of my understanding, I need to use PowerShell do install trellis and bedrock and it should be on Windows folder, right? But when I tried to install Trellis from the Powershell it can’t recognize the term git.
So this reason I thought I had to use WSL to install the project.

What do I need to do next? Setup git on my windows? because didn’t see anything about it on documentation (I have a feeling this is too beginner thing that should be already installed on my computer

So I really didn’t understand, It is says to run every thing from WSL 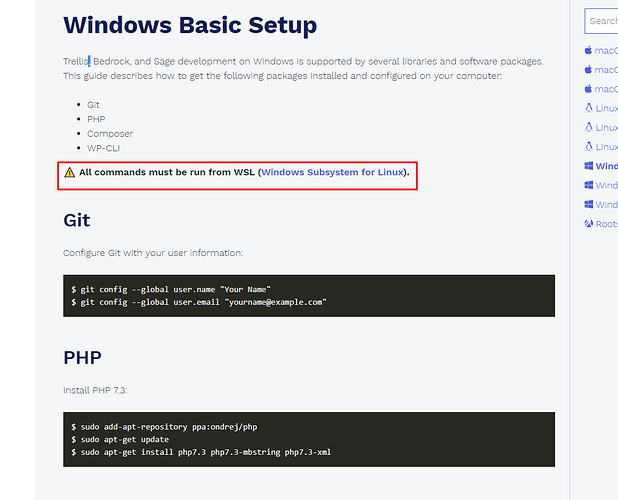 Please help me to understand what did I do wrong here.
Or maybe explain to me what do you do when you start a new project? (detailed one)