Hi, I’m trying to create extra scss files, i’ve included the @import in the main.css file but I’m still not able to get it working whenever I add any css to my new file i’ve added.

Also, i’m trying to add a mixins.scss file to keep my mixins there. Not sure if that makes a difference but thought it’d be important to mention.

Whereabouts are you adding them @earthjibber? The way I add new files and reference them in main.scss is by:

Yeah if you’re adding them to the main.css file, that’s the issue.

If you’re using SCSS, you shouldn’t touch the main.css file directly. Like @nathanielks said, import it into the main.scss file instead.

Also, postcss’ autoprefixr is perfect for this particular use-case. Depending on your version of Sage, it should be automatically included.

Then all i’ve done to my file structure is add _mixins.scss to the components folder. 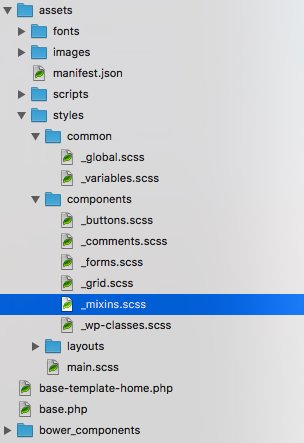 Sweet! Sage 8.5 has autoprefixer built in, so no need for that particular mixin.

The other scss files are working fine just wasn’t seeing my mixins file getting rendered so I assumed that the mixins.scss file wasn’t getting included.

I just tried it as transition: all 2s ease-in-out; and it worked! Thank You!

I do see the -webkit prefix but not any others, do I need to worry about the others?

Also, what about other mixins? I have some setup for transforms and positioning etc.

i’m just getting started with sage so I wasn’t aware of the autoprefixer. Are there other tools and fun things like that I should know about that would be related to css?

Just answered my own questions thanks for the help @nathanielks!