Files to upload to ftp

Which files and folders I have to upload to the FTP, after i run gulp --production?

If you are handing this off to the client, then I would suggest also uploading the assets directory.

i have to upload all the files in the root? (gulpfile.js, bower.json, package.json, CONTRIBUTING.md, readme ecc)

Nope. Pretty sure you can just whitelist the php files in the root

Wouldn’t you need the templates folder as well?

I use the following rules when syncing: 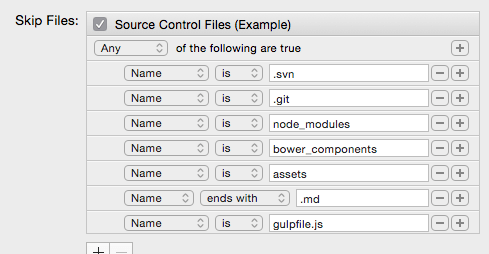 Wouldn’t you need the templates folder as well?

Oh yes this too. I should have just said “whitelist all your template files”

I am doing a client site which is on shared hosting hence I have to manually SFTP. Using he latest sage build too.

SO, which folder should i be uploading and which should I be missing?

can someone please give some clrification? thanks in advance…

As I said, this is the technical bare minimum. It could be helpful to include the source/build files for whoever picks it up in the future. In my situation I want to encourage teammates to do things the right way (i.e. use version control for the codebase).

I have a bash script that I have run with yarn prep that builds for production and then packages these into an zipped folder, which I have labeled [theme-name]-distribute-[timestamp]-[commit hash]. It also includes some version details and instructions inside if someone stumbles upon the theme in the future. This allows me to stay sane whilst using FTP.

1 Like
Transferring sage theme from local development environment to a live server
AmirFarid June 27, 2018, 1:36am #11

Thanks for the clarification. I have deleted files from resources (phew) and also uploaded the license.md

Nice little bash script. that will be super useful on the next build. currently, don’t have anyone else working on this project but the next one there will be so it will come in handy :-)