I’m trying to learn roots and downloaded and followed the instructions to set up the example project.

Also, i’m running all of this in a ubuntu instance inside a virtual box installed on windows.

(I’ve been strugling with this for 3 days now, tried every solution I could find and nothing worked
)

Try to turn on the GUI in the Vagrantfile and check the Virtualbox booting if there is a error or something which keeps it waiting. I had the same problem some time ago and it happened that it was an error dialog.

Thanks @dsemblano it worked! Not without some more hiccups tho…

For anyone who are still struggling with this here’s what happened:

After I did what dsemblano mentioned I got the error that VT-x/AMD-V wasn’t availble in my system. after a little poking around I found out that I had to enable this option in order to work on my virtual box: 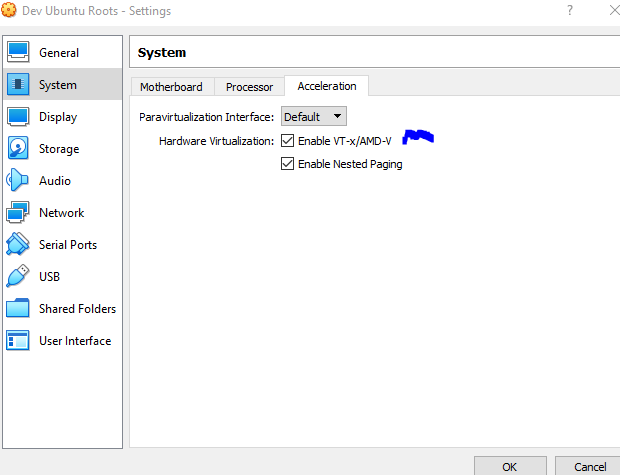 After that the machine starter and asked for vagrant user/password which was: vagrant/vagrant (FYI)

Since I was working on a vm the resources of the system are limited so I the system was running really slow, then I disabled the GUI after that first start and everything runs smoothly now!!

Glad to help out!