i want to change the host to, lets say example.com

if i rename it here, will my website work?

I’m not certain whether it would work, but it’s worth a shot. Here’s what I would try:

If somehow it blows up, I’d destroy/rebuild the server and run server.yml and deploy.yml, run the wp install screen, then import the DB with the new example.com name.

TLDR; Backup your stuff and experiment. Staging env’s love that kind of thing.

Sorry, for the find/replace in the DB:

what do you mean by wp install screen?

The first time you deploy using Trellis for a given site, if you navigate to your site’s domain, you’ll see the wp-admin/install.php screen (if you haven’t already imported a DB or installed WP using wp-cli etc): 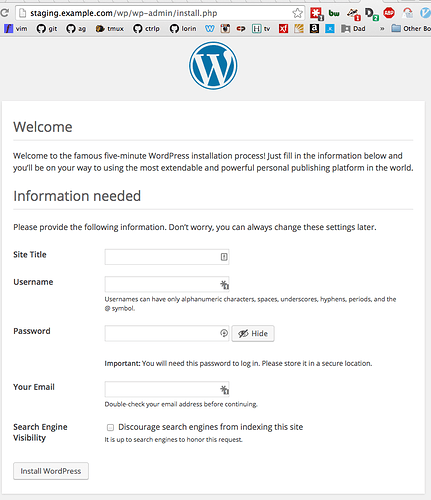 I just mean that if you have to rebuild the staging server, you’ll probably run into this screen on the next deploy. You could go ahead with the steps on the install screen, then replace the DB by importing your existing DB, if you have one. That’s just one approach.

oh okay … btw i have updated the server.yml to include this line

that way, i wouldn’t have to run the wp command line

Take a look at @swalkinshaw’s post about Deploying Bedrock Sites and the advantages of following the Capistrano deployment process. The server.yml playbook deliberately omits the wordpress-install role so that the deploy.yml playbook can do its magic. Yes, you need to install Wordpress once after the first deploy, but that’s it. Subsequent deploys are super easy.

okay … can we do an if/else deploy.yml to to the wordpress-install role?

just a suggestion, i will look into it.

Hi,
I changed from the IP address to the domain name (in sites and hosts) and now have a SSH error when provisioning or deploying:

Failed to connect to the host via ssh. fatal: [example.com]: UNREACHABLE! => {"changed": false, "unreachable": true} to retry, use: --limit @server.retry

I leaved the IP address on hosts/production. Not sure if it could create troubles ?